Sponges are considered the oldest animal group. They are multicellular but don’t have tissues or organs

The name porifera means ‘pore bearer’ in Latin (a pore is a tiny hole). A sponge’s body is covered by a skin, one cell thick. This skin has lots of small pores and a few large openings. The small openings are the entrances to a complex system of channels.

The channels lead to inner chambers lined with specialized feeding cells called choanocytes or collar cells. On each collar cell a flagellum is surrounded by a ring- like comb or collar. The beating of the flagellum draws water through the comb, where tiny particles are caught and carried down to the body of the cell to be digested. These collar cells pump water through the entire sponge and filter out food for the sponge cells to eat.

The body of the sponge is a loose collection of about six different types of specialized cells. Some of these cells secrete a supporting skeleton either of collagen fibers or of tiny, sharp mineral pieces called spicules. Collagen is a protein found in all animals that helps hold cells together. Other specialized cells in the sponge carry out growth, repair, nourishment, or reproduction.

Porifera fact: Many sponges can filter their entire body volume in less than one minute.

Asymmetrical: having no sides or halves that are alike
Spicules: structural elements found in most sponges that provide structural support, like a skeleton. Spicules can be made of silica or calcium carbonate.
Collar cell or choanacyte: these cells line the interior of the sponge
Flagellum: a whip-like structure attached to the ends of the collar cells; they pump water through the sponge’s body. 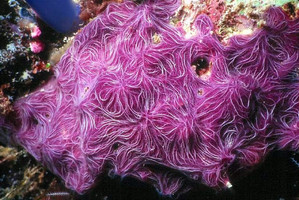 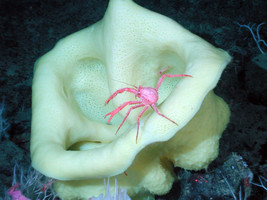 This tree diagram shows the relationships between several groups of organisms.

The root of the current tree connects the organisms featured in this tree to their containing group and the rest of the Tree of Life. The basal branching point in the tree represents the ancestor of the other groups in the tree. This ancestor diversified over time into several descendent subgroups, which are represented as internal nodes and terminal taxa to the right.

Sponges (phylum Porifera) are an exclusively aquatic and, with a few exceptions (Vacelet and Boury-Esnault 1995), a filter-feeding group of animals. The group consists of approximately 15,000 extant species in three distinct groups (Hooper and van Soest 2002):

Adult sponges can be asymmetrical or radially symmetrical and come in a variety of sizes, colors, and shapes, including arboresecent (tree-like), flabellate (fan-shaped), caliculate (cup shaped), tubular (tube shaped), globular (ball shaped), and amorphous (shapeless) among others. Sponges occupy both freshwater and marine environments, from shallow to abysmal depths, and are common in coral reef, mangroves, and seagrass ecosystems. In some places (e.g., Lake Baikal, Russia) sponges dominate benthic communities and along the pacific cost of North America they form modern sponge reefs.

The body plan of a sponge is simple (e.g., De Vos et al. 1991): a single outer layer of cells (the pinacoderm) separates the inner cellular region (mesohyl) from the external environment. The pinacoderm lines the internal canals and is eventually replaced by the choanoderm, a layer of characteristic flagellated collar cells (choanocytes) grouped in chambers. Choanocytes make up the principle ‘pump’ and’ filter’ of the system, driving water through the sponge, trapping and phagocytizing suspended bacteria and other particulate food, which is then digested and nutrients distributed among the cells of the mesohyl that facilitate the functions of feeding, respiration and reproduction. The flow of water inside a sponge is unidirectional: the water is drawn in through tiny pores (ostia) in the pinacoderm and exits through one or more larger openings (osculae). The aquiferous system of a sponge is usually supported by a combination of two types of skeletal elements: mineral spicules (either calcareous or siliceous) and special protein fibers (spongin), although either one or both of these elements can be absent.

The 19th-century discovery of a remarkable similarity between porifera-specific choanocytes and free-living choanoflagellates led to a proposition that sponges are the most primitive metazoans, evolved from choanoflagellate-like protist ancestors (Clark 1866; Clark 1868). The ancient origin of sponges is corroborated by the existence of a poriferan fossil record going back to the Early Vendian (

Traditionally, sponges have been regarded as a monophyletic group defined by several synapomorphies (Hooper, Van Soest, and Debrenne 2002), including the presence of:

The latter feature is often considered to be the most important (Lévi 1999). Indeed, the sponge body is unique among animals because it continuously remolds itself to fine-tune its filter-feeding system. The constant rearrangement of the body is accomplished by the amoeboid movements of cells inside the sponge and their change from one differentiated form to another.

Although often considered immobile, sponges also display several behavioral patterns (resulting from coordinated movements of cells), including crawling, production of filamentous body extensions and body contractions (Nickel 2004). It is also often mentioned that sponges lack many characteristics associated with other animals, including a mouth, sensory organs, organized tissues and neurons and muscle cells, which are otherwise ubiquitous in Metazoa. It is difficult to say, however, whether the lack of aforementioned features represents a primitive condition of sponges or a secondary loss due to their sedentary and water-filtering lifestyle. Indeed, a recent study has shown that the homoscleromorph sponges possess several characteristics thought to be absent in sponges, including the presence of true epithelia (Boury-Esnault et al. 2003). Another study has found that although sponges do not have neurons, their genome contains most of the components needed to build a post-synaptic protein scaffold that is essential for neural impulse transduction in other animals (Sakarya et al. 2007).

Although the presence of three distinct groups among the extant sponges (classes Hexactinellida, Calcarea, and Demospongiae) is largely unchallenged, the evolutionary relationships among them are controversial. Gray (1867) was first to subdivide all sponges into ‘Porifera Silicea’ and ‘Porifera Calcarea’ based on the chemical composition of sponge spicules (silica vs. calcium carbonate), a view still advocated by some scholars (e.g., Böger 1988). More recently, Reid and Reiswig and Mackie (Reiswig and Mackie 1983) subdivided Porifera into ‘Cellularia’ (Demospongiae plus Calcarea) and ‘Symplasma’ (Hexactinellida), based on the syncytial nature of the choanoderm and pinacoderm in glass sponges (Hexactinellida). Unfortunately, neither chemical composition of spicules nor syncitial nature of glass sponges are likely phylogenetically informative. First, a diverse range of siliceous structures is known in different groups of unicellular eukaryotes, including choanoflagellates, the sister group of animals (Preisig 1994). Second, the syncytial tissue in glass sponges appears to be a derived trait within this group because the development of glass sponges starts with a cellular embryo (Leys, Cheung, and Boury-Esnault 2006).

Similarly, molecular studies have so far been also inconclusive in regard to poriferan relationships, although they suggested two interesting alternatives: 1) the paraphyly of sponges (Cavalier-Smith et al. 1996; Collins 1998; Adams, McInerney, and Kelly 1999; Borchiellini et al. 2001; Rokas, Kruger, Carroll 2005; Peterson et al. 2008) and b) the presence of a distinct fourth class of sponges: Homoscleromorpha (Borchiellini et al. 2004; Nichols 2005; Peterson et al. 2008). However, the latest and the largest molecular phylogenetic study supports the traditional view that sponges are monophyletic (Philippe et al., in print).

Other Names for Porifera

Clark, H. 1868. On the Spongiae ciliatae as infusoria flagellata, or observations on the structure, animality and relationship of Leucosolenia botryoides, Bowerbank. Annu. Mag. Nat. Hist. 4:133-142.

Nichols, S. A. 2005. An evaluation of support for order-level monophyly and interrelationships within the class Demospongiae using partial data from the large subunit rDNA and cytochrome oxidase subunit I. Mol. Phylogenet. Evol. 34:81-96.